This weekend was the vintage tea party, it totally amazes me that I could have horded so many vintage tea sets and embroidered doilies!
A friend lent me the shop space which was newly refurbished. A kitchen had just been plumbed in! little did we know … the water had been switched off, so we tried to turn it on when we did we found a leek! So for the first hour we were mopping up water and serving customers. Thank god for Emily my friend, (who had done all her own plumbing at home) who with her intellect managed to stem the flow! After that the day went swimmingly! (with a little help from Emily, Mollyqueen and Si! Thanks guys).
I would say that my favourite part of this weekend’s menu would be the plum muffins. Like the tea sets, I had horded some damsons and plums from the allotment in my freezer for later use; and they really did add some thing to those muffins. I based them on an Ottolenghi recipe. I will be using the plum compote recipe again its so yummy and adaptable, I had some left over this morning in yogurt and I can see application in crumble. As I fell in love with this sticky compote I thought you may like to have a bash at it so here is the recipe (it is soooo easy!) 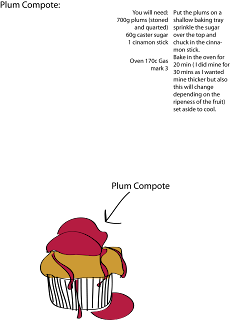